As Cooper and I continue to create new content and market it, I also seek to promote some of our past projects. As I believed I mentioned, I was tweeting during the Oscar telecast and a few film festivals requested our first film, the romantic comedy short, Isn’t It Romantic? the film which began this blog. One of the festivals was the Best Shorts Competition. Our movie was accepted and we were just notified that we won an Award of Recognition.

Best Shorts is a well connected competition in La Jolla, CA. As a result of the award, we will be included in press releases and other publicity which will be viewed by industry professionals. We also get to display another laurel. This is pretty exciting for a project we finished four years ago. Every step forward is crucial. 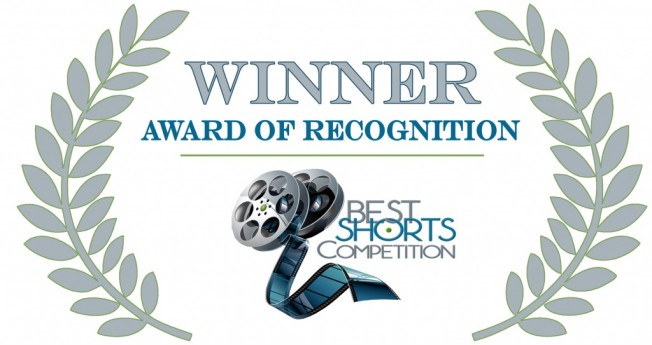 Another project that got a boost, which some of you who have read my blog from the beginning may remember is my feature romantic comedy script, Soul Mate. I entered it into the Stage32 Comedy Writing Contest. I was recently notified that is has been chosen as a quarterfinalist. Soul Mate is a script of which I am very proud. Whatever I have to do, I will get it to the screen one day. Winning this contest would go a long way toward achieving that goal. The grand prize winner is flown to LA for a meeting with a group of industry professionals to discuss the development of the winning property. Two winners will get Skype meetings with the pros and every finalist will have his or her logline sent to over 500 professionals. This is a very good opportunity and if nothing else, getting to the quarterfinals is a nice confidence boost.

In the meantime, Cooper and I have something else on the horizon that has not been finalized so I can’t share it yet, but it’s very good. Hard work and persistence do pay off.

If anyone would like to view Isn’t It Romantic? you can see it on our YouTube channel here: IIR on YouTube. Stay tuned folks. As the song says, “The best is yet to come!”

There are a number of areas in which we are aiming to improve our performance on our current film.  One of the most important is publicity.  I did make an attempt at this on ISN’T IT ROMANTIC?  It was the reason, after all, that I started this blog.  I never really got the hang of it though.

Early in preproduction, I had a member of my team assigned to handle our social media.  He had some problems with his computer but honestly, was not making much of an effort anyway.  For this individual, filmmaking is a hobby, just a way to satisfy his curiosity about how movies are made.  I ended up handling all of it myself.

It’s not difficult, just time consuming and with everything else a director must do, there isn’t much time left over to really do the job effectively.  I also was new to both Facebook and Twitter.  I have done considerable studying and also have learned from my past experience.  I’m trying to manage my time better and make room for PR.   I’m off to a better start on MY SPIRITED SISTER.

With our IndieGoGo campaign going live next month, it is crucial to get the word out about the film and our crowd funding goals.  I’m much more adept with social media, for example, in the use of hashtags.  I’m doing a much better job in reaching more people.  This time around, I am also using traditional media, as recommended by mentors I trust.

I contacted the arts editor of the Danbury, CT News-Times and a reporter is going to write a feature article.  He’ll interview Cooper and me about our lives as independent filmmakers and also about MY SPIRITED SISTER.  It will be a great way to reach out to our local community and let them know what two of their fellow citizens are doing and how they can be a part of it.

I’ve also booked an interview for us on a public access television program in West Hartford.  I’m very excited.  I did a fair amount of television in my stand up days, public access and interviews on local news stations.  It’s a lot of fun and I’m very comfortable doing it.  We’re also planning to book our three young stars on the show in a few weeks to help give the campaign a boost at the midpoint.

It’s very exciting and I’m proud that we’re taking such big steps forward.  We’re hoping to raise a significantly greater amount of money for this film.  We want to make a better movie and would love to be able to pay everyone involved at least something for their efforts.  We’ll also be able to rent more and better equipment and have a bigger budget for set design and wardrobe.

I’m feeling proud of myself.  I’ve always picked things up very quickly and that seems to be holding true thus far for my filmmaking career.  My confidence is at a very high level and my self esteem has never been better.  Pretty good for a neurotic kid who never went to film school.  Like my fictional counterpart from ISN’T IT ROMANTIC? Danny Kresky, I’m no ordinary schmuck.

Isn’t It Romantic? – A short film

Isn’t It Romantic? – A short film

Day 1 of production on My Spirited SisterJanuary 11th, 2014
MSS is underway.